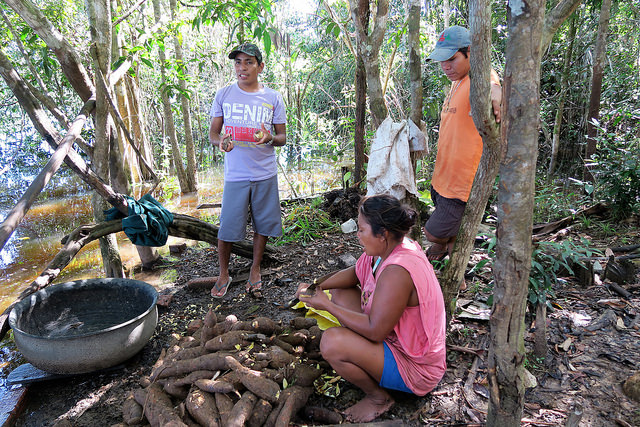 After camping overnight in the Amazon jungle and a short breakfast at Amazon Tupana lodge we would depart by 0830 to see a local Amazon tribe. It would take an hour by motorized boat to reach them.

I applied and carried extra sunblock (SPF 50) as we’d be under the harsh sunlight for most of the journey.

The reflections of the trees onto the river look amazing en route.

We made 2 stops at different parts of the village. The first stop was to a shelter on the riverbank where a lady and her 5 year old daughter were peeling potatoes.

The liquid of this potato is poisonous and can kill a person who consumes it within 30 minutes. There are no hospitals out here to save you should that happen.

They take the peeled potatoes and grind it manually or with a mechanical machine to get the yellow flour which they use to make tapioca and other meals with.

Some of the yellow flour is sold in regional markets as the village needs cash for fuel (for their motorized boats) and other essentials. However, 6 large bags of flour will only earn them 100 Brazilian reals. This is a lot of hard manual labour for a little cash.

If you let the poisonous liquid sit for a few minutes, white flour separates and settles to the bottom. This white flour is safe to eat, used as baby food, and eaten with Brazil nut and milk by children.

We were told that some tribes leave the poisonous liquid to ferment for many months to produce alcohol. Nothing gets wasted.

Our guide peeled some Brazil nut for us to eat.

I’ve never eaten it so freshly.

We then went by boat to the larger section of the village atop the river bank.

We met the sister and family of the initial lady we met (peeling potatoes).

The village is quite simple with a few shelters.

They have a small soccer field which the community plays on every Sunday.

Behind the soccer field we were shown the potato plantations.

The crop produces both white and yellow potatoes.

The white potatoes are not poisonous and can be cooked and eaten with minimal preparation. The bark of one of these trees can be used to grow a hundred new trees. These trees grow year round and the field can be used to grow this crop for 30 years before it becomes too acidic. Only ash for burnt trees is used as a fertilizer.

Our guide was explaining to us that these villagers are nomadic, having moved here from other parts of the Amazon rainforest in surrounding countries. He doesn’t believe that there are any undiscovered tribes. These people move around often and all share the same languages.

We then spent the next hour getting back to Amazon Tupana Lodge in the blazing sun, passing through the submerged forest near the end of the journey.

It was eerie traveling through a section of the forest that was destroyed by a fire during a drought in 2012.

I drank the Guarana Bare soda in room as soon as I returned and had a shower.

I then ate some very thorny fish for lunch before deciding to join the Brazilian family who were chilling in the hammock area. We weren’t chilling too long before being visited by a cobra that can REALLY jump.

After that disturbing incident I headed to my room. We said goodbye to 9 guests who were departing the lodge that day. We’d be going piranha fishing later that afternoon…

The Funniest Travel Videos of 2021

Tips before embarking on an adventure

The Funniest Travel Videos of 2020

Zaid is an intrepid traveler from South Africa that has traveled to all 7 continents. He loves to explore new destinations, experience new activities and go off the beaten path.
Read All Posts By Zaid

Preparation for hiking the Otter Trail in South Africa

Preparation for my first TBEX conference in Athens